The Elbe is one of Germany’s largest rivers. It rises in the northern Czech Republic, and flows through many large german cities including Dresden and Hamburg, before flowing into the North Sea in Cuxhaven, 110 km north of Hamburg. In the quick travel vlog below (taken this time last year, and now finally uploaded) you can see what the Elbe looks like in Hamburg, where it’s (now) wide and deep enough for container ships to pass through. With the ships growing in size, the Elbe has been excavated several times, to allow the bigger container ships in to the port of Hamburg. One of my favourite features of the Elbe are the pretty freshwater shells being washed up to the banks, that have a very pretty purple mother of pearl interior. I’m going to use those for jewellery, a tutorial for that will be up here and on my Youtube channel in the future.

Along with this week’s video (scroll down to view), we have a printable pattern, so you don’t need to be on your computer every time you want to make these cute Nordic-style Christmas stars.

Coming in Handy for the Christmas Season

What I love about them is the fact they are so easy to make, and the colors red and white make them just perfect for 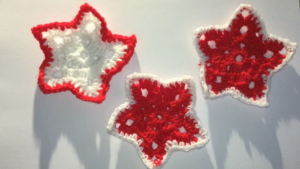 Christmas. You can attach them to a ribbon to create a Christmas bunting, or you can attach a length of yarn at one of the points to hang the star in your Christmas tree.

Have fun, and enjoy your Advent and Christmas season!

* The links listed above are affiliate links. These will help maintaining this website as I will earn a small commission in the event of a sale; this will not increase or in any other way affect the price you pay.

This is actually the first gymnastics tutorial I’ve ever published, and it’s going to be on how to do and elbowstand, and hold it long. I’ve been doing gymnastics at home for years now, and especially over the lat few years, I have improved my skills and learned some new ones as well. There are a few unedited gymnastics tutorials still in the pipeline, so make sure to keep tuned!

In the UK, at least, the woods are just “hopping” with these cute small creatures called grey squirrels. They came to Europe centuries ago, when they immigrated on ships. Once here, they drove away the original red squirrel to limited districts in the north of England and Wales. Since the squirrels here have a little brown as well, they probably mixed with red squirrels and inherited a bit of their colour.

If you’ve tried to approach these little animals, you’ve probably seen them scuttling away and up trees as fast as they could. But there is a rather simple method for feeding them: if you put out nuts in your garden, it probably won’t be long till the first grey squirrels become regular visitors. We put up a plank to our window-sill and put nuts on it. The squirrels soon noticed and begann coming up there regularly.
Next, we carefully held a (large) nut between two fingers (holding them in the hand is not recommendable, since are afraid of that), so the squirrels could take it with their teeth. That is why you will need a large nut, for if it’s too small, they could mistake your fingers for nuts and try to bite*. An alternative to this is to hold the nuts between pliers.

*AroundTheYear will not be responsible for any consequences from feeding squirrels.

Join the AroundTheYear Group on Facebook: there you can exchange your ideas with other crafters. AroundTheYear will be updating the group regularly with new exiting DIY projects and creative ideas. Join now!

Read about the whole experiment here!

Subscribe to Aroundtheyear Update Alerts
Your name and email address will not be sold.
Clifton's Lightbox